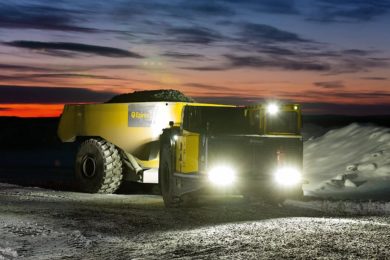 Epiroc has been prepared to electrify the underground mining industry for more than 30 years, so it is no surprise its battery-electric solutions are now firmly taking hold in the sector.

In a presentation titled, From one generation to the next learnings from zero emission mining, the pair discussed the evolution of the companys battery-electric offering. While the companys first Scooptram ST7 Battery was manufactured in 2013 (then under Atlas Copco), the electrified thinking started decades before this, according to Hedqvist.

In the 1980s, we had the first [electric] concept available, but the market was not ready then, he said.

The market is certainly receptive now, according to Boudreault.

Initially, we had a relatively small market segment for these battery-powered vehicles; now, were much more into a global offering, he said.

This has seen the company deliver battery-electric vehicles to six continents, he said, including North America, South America, Europe, Africa, Asia and Australia.

And, in the process, Epiroc has amassed more than 120,000 operating hours from battery-electric machines that include 7 t, 10 t and 14 t LHDs; 20 t and 42 t trucks; and a range of battery-electric mid-sized drilling equipment including face drilling, production drilling and rock reinforcement rigs. The company also offers a 4 t LHD to the Chinese market, and has plans to test an 18 t battery-electric LHD at the LKAB-led Sustainable Underground Mining (SUM) project, according to Hedqvist.

Looking at these numbers in more detail, it is clear to see the companys electrification efforts have accelerated.

Back in November 2018 when the company launched its second generation of zero emission equipment, Epiroc said it had more 65,000 hours of battery-electric operations under its belt. It has almost doubled that amount in the space of two years.

This pace is expected to step up again in the future, with Boudreault saying the company is now taking aim at the retrofit market.

Were not only satisfied by selling new equipment; we have quite a huge fleet out in the world that has left our factory with a diesel engine, he said. What we are doing is creating conversion kits so machines can be converted from diesel to battery power out in the field, meaning we are actually reducing the utilisation of diesel in the mining industry in an active way.

Helena Hedblom, President and CEO of Epiroc, toldIMrecently that thecompany had developed its first battery retrofit kit for a diesel-powered ST1030 LHD.

Boudreault was also keen to point out that Epirocs OEM-agnostic message extended to electrification of equipment outside of the companys current offering.

We dont have all of the products that our customers may require, so we are partnering up with other companies that dont have the strength of developing their own electrical solutions, he said. We are basically taking our (electric) solutions and putting them on other OEMs machines.

After Boudreault concluded the presentation with the benefits that came with adopting the companys battery-electric equipment an up to 70% reduction in energy consumption and 10% boost in productivity Hedqvist responded emphatically to a question about the potential for Epirocs third-generation machines: The beauty with electrification is the sky is the limit in terms of what you can do, speaking freely.

This is not only about batteries, but also about electric drive lines and technical solutions that can enable you to design a machine that is completely different to the design of the original diesel versions.

As miners look to mineralisation at increasing depths to sustain operations, a major equipment design overhaul from one of the industrys biggest OEMs could be just what is needed to generate an economic mine plan.