Barricks Carlin operation in Nevada was the worlds largest gold producing center in Q1 2021. Freeport-McMoRans Grasberg mine in Indonesia has jumped into second place as underground mining progresses.

Kitco ranked the top ten largest gold mines in the world based on the reported production figures for Q1 2021; hence, the worlds largest Muruntau gold mine in Uzbekistan was excluded from this quarterly ranking due to lack of data.

BarricksCarlinoperation in Nevada, USA, is the largest gold producing center globally. Carlins gold production of 373 koz in Q1 2021 was 9% lower compared to Q1 2020, mainly from lower roaster throughput due to higher carbonaceous content, which in turn also negatively impacted the overall feed grade due to blending.

Olimpiada, the largest gold mine in Russia owned by Polyus, is the third biggest gold operation worldwide. Olimpiada produced 265 koz of gold in Q1 2021. On a year-on-year basis, its total gold output decreased by 4%, which was primarily driven by lower grades in ore processed and lower recovery rates.

BarricksPueblo Viejomine in the Dominican Republic sits fourth with 229 koz of gold produced in Q1 2021. Gold production at Pueblo Viejo was 4% lower than the same prior year period, due to lower throughput resulting from planned autoclave descaling and relining activities, partially offset by higher ore grades in line with the mine and stockpile processing plan.

Another BarricksLoulo Gounkotomine in Mali sits fifth with 193 koz of gold produced in Q1 2021. Gold production at Loulo Gounkoto was 10% higher compared to the same prior year period, primarily due to higher grade ore processed and an increase in recovery.

The complete list of the top ten largest gold mines in the world in Q1 2021 can be found on the chart. 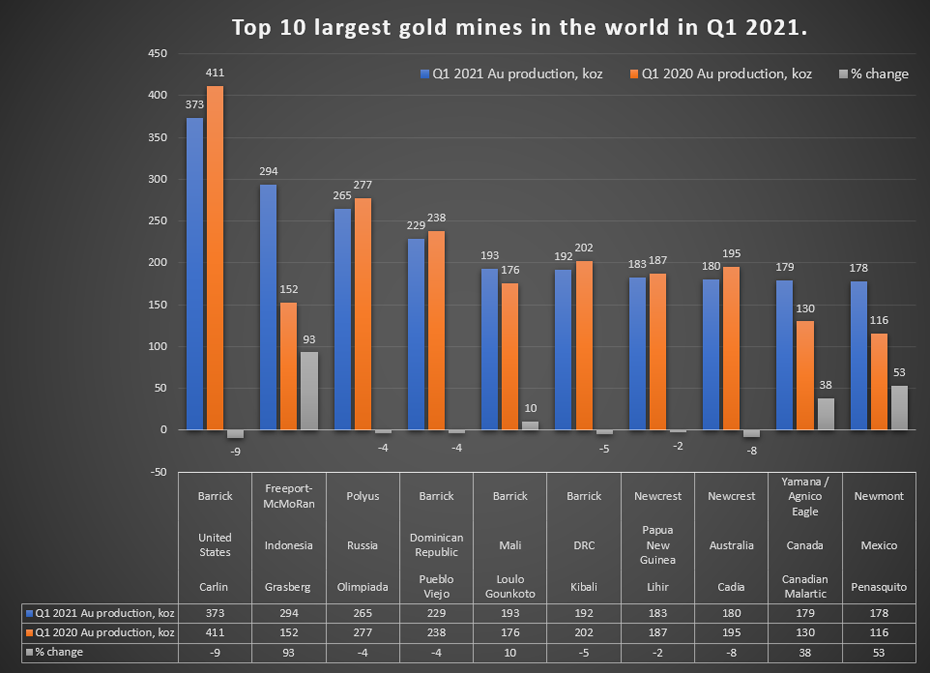