South Korean thermal coal imports rose by 2.3mn t or 25pc on the year to more than 11.6mn t in July, according to customs data released today, narrowly surpassing the previous high recorded in September 2017.

Daily mean temperatures in Seoul averaged 28.4C last month, making it the hottest July for at least 11 years, with daily peak power demand rising by 18pc on the year to a likely record-high average of 81.2GW.

At the same time, nuclear availability fell by 1.7GW on the year to 16.2GW, compounding the country’s reliance on fossil fuels to meet electricity demand. The 1.4GW Shin Kori 4 reactor was unavailable for most of the month because of an outage, while four other reactors were off line for the whole month for planned maintenance.

Generation from coal and gas rose strongly on the year in July to meet the spike in demand, with South Korean LNG imports climbing by 71pc to more than 4mn t and outpacing the 25pc growth in seaborne coal receipts.

Power-sector fossil fuel demand is set to remain firm this month as well. South Korea’s official weather office sees a 40-60pc chance of above-average temperatures through the remainder of the month and only a 10-20pc chance of unseasonably cool conditions.

The rise in South Korean imports in July was driven solely by Australia, as receipts from other key origins all slipped on the year.

The country received 3.9mn t more Australian coal than a year earlier and 6.3mn t in total, which was probably a record high and surpassed the previous peak of 5.1mn t recorded in December 2015.

The increase offset declines from Russia, Indonesia and the Americas, which fell by a combined 1.4mn t on the year to 5mn t.

In the January-July period, South Korean imports were up nearly 1mn t on the previous year at 55.9mn t, but still down from 62.2mn t in 2019. Receipts from Australia were up by 8.6mn t, with Indonesian and Russian supply down by 3.8mn t and 1mn t, respectively, and Americas inflows were flat. 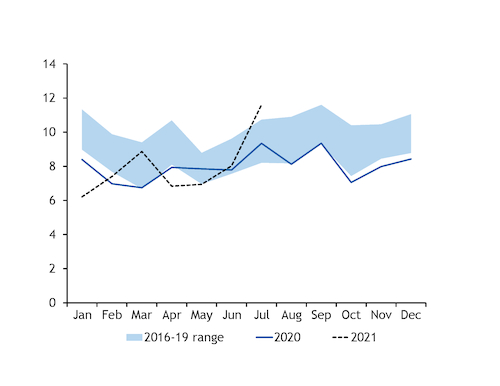 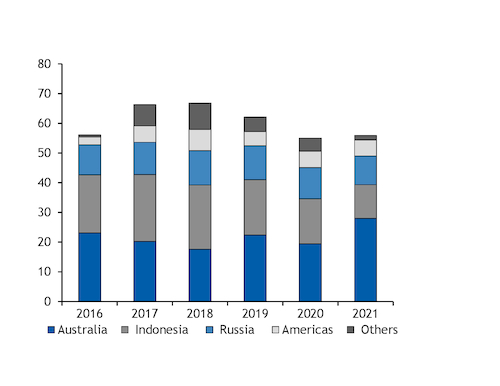