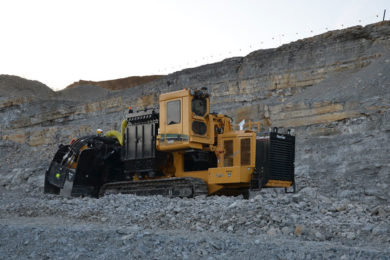 For more than 125 years, Switzerlands jura cement, a subsidiary of CRH PLC, has served as a manufacturer and supplier of building materials. However, mounting community pressure regarding dust emissions, vibration and noise are threatening the companys future at its largest quarry operations. To address these concerns, jura cement is implementingnew precision surface mining methodsto help secure the quarries future.

Comprised of two production plants, jura cement produces more than 1 Mt/y of cement. The bulk of its annual production is mined at its quarry operations in Wildegg, which first opened in 1891. In those early days, there was nothing but open land around the quarry, but as the mine and surrounding community has expanded, the bordering area between the two has continued to shrink.

There are now residential areas surrounding three sides of jura cements Wildegg facility and growing concern from local inhabitants about how the mining operation extracts limestone for the quarry. To address these concerns, quarry officials conducted an internal investigation several years ago to determine how they can be better neighbors to the community while continuing to produce the materials their customers need.

Based on our findings, it was determined that we needed to lower blasting-induced ground vibrations, which were already relatively low, to ease the concerns raised by the surrounding community, explained Marcel Bieri, Manager of Cement Production for jura cement. Our search for alternative mining methods started in 2012, and since then weve explored several mining techniques, including rock excavation using a hydraulic excavator, ripping material with dozers and specialised surface excavation machinery. Based on our findings, using surface excavation machines is the most efficient mining method among those we tested. From there, we just needed to determine which equipment would be the most efficient to operate at our Wildegg quarry. 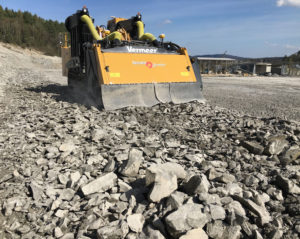 After determining that surface excavation machines would be the best way to address the local pressures related to ground vibration and dust emissions, the team at jura cement began to seek out the right machine and equipment partner to work with their organisation. After attending a mining industry exhibition and meeting surface mining equipment manufacturers, the group narrowed its search to two equipment suppliers.

According to Bieri, it was important for their group to be able to evaluate the performance of the equipment and gauge the level of support they could expect from representatives of each of the manufacturers. We knew that there were already many mining operations around the world using surface excavation equipment, but this way of mining was still new to us and most of Europe at the time, added Bieri. Early on in our process, several people from our organisation visited an A8 Autobahn construction site in Germany where we got to see theVermeer T1255 Commander 3 Terrain Leveler surface excavation machine (SEM)in action. While we were impressed by the machines productivity, we needed to determine if it was the right machine for mining limestone.

To help answer a few of the team from jura cements questions, delegates from Vermeer AG connected them with limestone mining operations in five different countries from around the world. They also collected rock samples from the jura cement quarry and sent them to theVermeer Rock Labin the United States. Based on those results and the jura cement teams research, it appeared the Vermeer Terrain Leveler SEM would be an excellent option to conduct further testing with at the quarry.

Along with another machine, jura cement rented a newVermeer T1255III single-sided direct drive Terrain Leveler SEMfrom Vermeer AG for a six-month trial period. Afterward, the group would then select a long-term partner.

Throughout the trial rental period, the jura cement team paid close attention to production rates, machine operational costs, service support and operator feedback. While both surface mining units production rates and operational costs were in line with drilling and blasting methods in softer rock (marl), the Vermeer Terrain Leveler SEM proved to be the right solution because of several key attributes.

The Vermeer Terrain Leveler SEM was the top performer working close to the edge of the cut, its lower centre of gravity provided stability on uneven terrain, said Andreas Kofler, Project Supervisor for jura cements Wildegg quarry. Our operators also appreciated all of the assisting tools built into the Terrain Leveler SEM.

Regarding performance, the Vermeer Terrain Leveler SEM has been able to achieve an average production cutting efficiency of 250 t/h while working in soft to medium rock up to 80 MPa at the jura cement jobsite(s). With a fuel consumption average of 70.9 L (18.2 g) per hour and normal preventive maintenance expenses, jura cements operational costs fall in line with other drilling and blasting methods when working in soft and heavily ragged rock.

At the conclusion of our trial rental period, we evaluated all of the results and chose to extend our rental agreement with Vermeer AG for the Vermeer Terrain Leveler SEM, said Kofler. Due to its good off-road capability, it outperformed the other surface mining machine that we tested and Vermeer AG has proven to be a good partner for our organisation. Moving forward, we will likely continue to use drilling and blasting methods in limestone, but believe that the Vermeer Terrain Leveler SEM will help us address the concerns of the community around us.

According to jura cements Manager of Production at the Wildegg location, Markus Bolliger, the company has plans to expand its operations at this facility, but need to be able to demonstrate to local officials they are taking actions to reduce vibration, dust and noise concerns. During our six-month rental, we were able to reduce the ground vibration felt around the quarry significantly, explained Bolliger. The Terrain Leveler SEMs dust suppression system has also helped us cut airborne emissions.

The strides weve been able to make over the last 18 months has helped us earn the trust and respect of community officials and residents, Bolliger said. They can see that were taking their concerns seriously and are taking the necessary steps to verify that the quarry can remain open and continue to expand in the future. There have been a lot of changes in the world since our organisation first started mining; it only makes sense for our mining methods to change too.