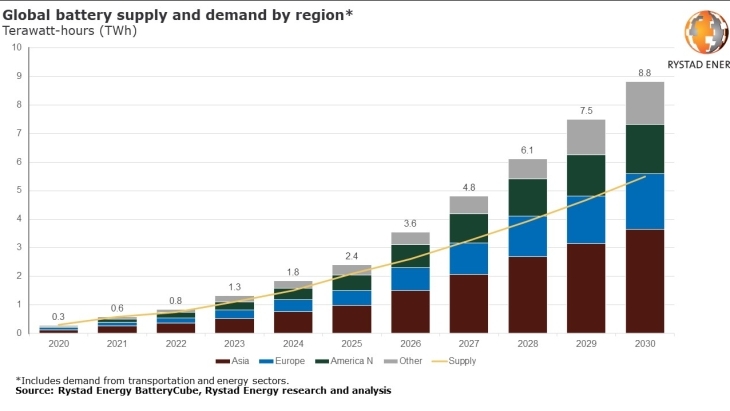 Demand from the region will account for 41% of the global market.

Asia is projected to dominate regional battery demand by 2030, as Rystad Energy estimated it will account for 41% of the global batter market, reaching 3.6 terawatt-hours (TWh).

This demand will largely come from China, which has a target of 50% of global cell production by 2030.

Globally, battery demand is seen surging exponentially to nearly 9tWh annually by 2030, which is 15 times the level recorded in 2021. Battery demand in 2021 hit 580 gigawatt-hours, more than double its 2020 total.

“Battery demand growth is inevitable as the energy transition quickens, but global supply will fall short without substantial investment or improvements in battery technology in the immediate future,” Marius Foss, head of global energy systems at Rystad Energy, said.

“Based on announced targets, battery supply will hit 5.5 TWh by 2030, meeting only about 60% of the expected demand. Gigafactories are being built quickly worldwide, and this supply outlook will likely change. Still, the importance of these continued investments cannot be understated.”

Rystad added the demand project is in line with a 1.6-degree global warming scenario and any change required to energy systems.

The research firm also noted passenger electric vehicles will likely contribute the most in battery growth, followed by stationary storage.