The average total cash cost of nickel production increased 14.7% year over year in 2021, reaching $4.52 per pound based on increased minesite operating costs, including labor, energy inflation and freight. With future efforts on cost controls partially offset by high inflation and volatile exchange rates, we forecast the total cash cost to decrease 1.3% to $4.46/lb in 2022.

Nickel miners enjoyed spectacular all-in sustaining cost, or AISC, margin growth and bumper earnings in 2021. Nickel margins increased sharply to $2.67/lb from $1.64/lb the previous year, benefiting from a higher nickel price. This is a significant improvement amid the severe economic and operational strains seen in early 2020.

Inflation was the most significant headwind driving up costs in late 2021 and 2022 to date, pushing up power and fuel prices, as well as shipping rates. Labor costs have risen partly due to COVID-19 travel restrictions limiting skilled workers and increased corporate healthcare and safety budgets. Nickel pig iron, or NPI, producers have been doubly impacted by increases in thermal and metallurgical coal prices, which increased 145% and 229%, respectively, in 2021. Logistics and shipment issues also contributed to upward pressure on nickel miners’ total cash costs, including high freight costs, shortage of containers and vessel space, and disruptions to major sea routes. Royalty costs increased 10 cents/lb in 2021 on higher nickel prices. Processing of high-grade material is expected to be the most significant factor in offsetting cost inflation.

Cost inflation is persisting in 2022; however, we estimate the total cash cost will decrease 1.3% year over year, to $4.46/lb. Energy and shipment costs are increasing the most but will be largely offset by falling labor costs and administrative expenses. 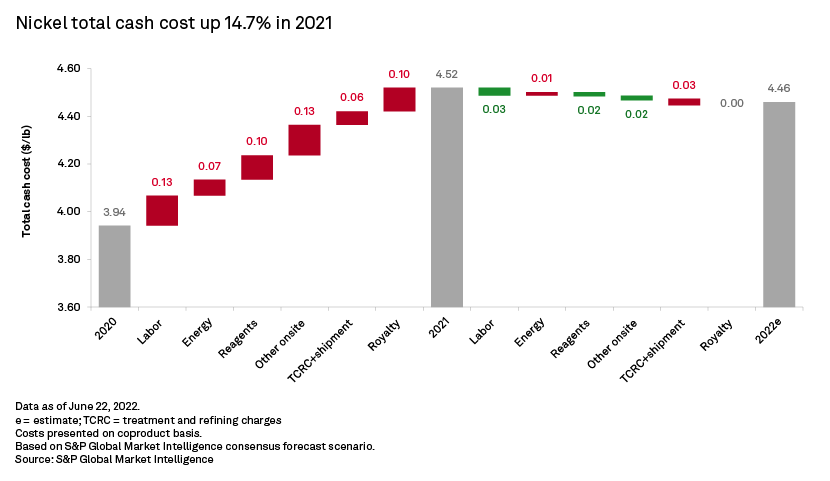 Nickel prices have climbed since April 2021, propelled by favorable demand and supply fundamentals, and positive sentiment around future demand for nickel — primarily for use in batteries. The extraordinary AISC margin in 2021 was driven mostly by the surging nickel price and increased byproduct credits from platinum group metals. The average AISC margin for primary nickel mines rose sharply to $2.67/lb in 2021, supported by a realized nickel price that increased 27.2% year over year, to $7.97/lb, despite a 14.6% rise in the average AISC, to $5.31/lb. 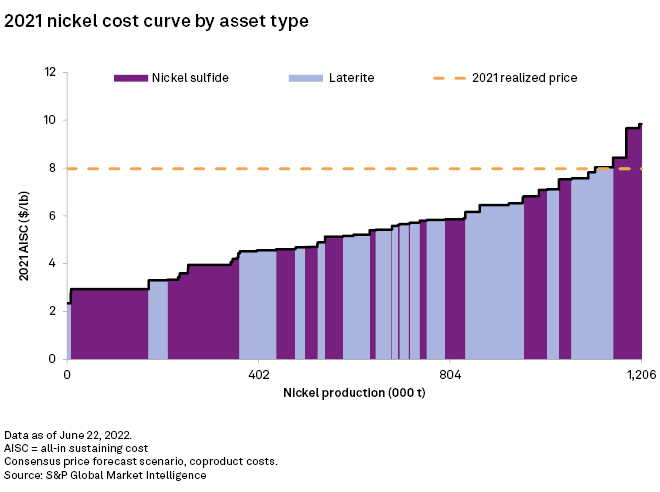 Notably, Tsingshan Holding Group Co. Ltd. started its NPI-to-matte conversion operation in Indonesia in December 2021 and made the first shipment of nickel matte to China in January 2022. Originally scheduled for October 2021, the conversion operation start date was delayed two months because of more favorable NPI margins than nickel matte and a lower-than-expected price for nickel sulfate. Given the government’s pledge to stop building new coal-fired power plants in Indonesia after 2023, new NPI projects in the country may adopt oxygen-rich side-blow bath smelting technology to produce nickel matte, in order to meet manufacturers’ demand for nickel sulfate, and also high-pressure acid leach projects. 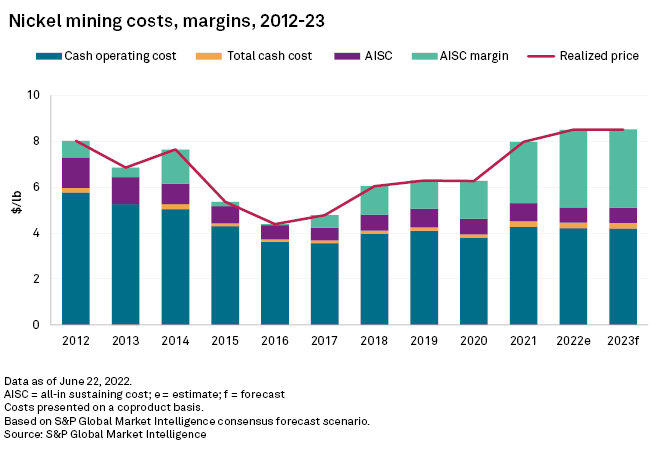 Norilsk Nickel was the lowest-cost company on the coproduct curve, benefiting from byproduct credits and economies of scale. Its average AISC was $2.95/lb in 2021. The company released its long-term strategic goal of expanding production capacity 25%-30% by 2030 to meet fast-growing demand for electric vehicle battery materials in Europe. The capacity of Harjavalta Oy nickel refinery in Finland will be expanded to 75,000 tonnes per year by 2023 and to over 100,000 t/y by early 2026. The expansion of the Talnakh concentrator, or Talnakh Phase 3, is scheduled to increase throughput capacity to 18 Mt/y from the current 10 Mt/y by 2023, with a total capital investment of approximately 40 billion rubles.

We estimate an average AISC of $3.95/lb for Jinchuan Group in 2021, unchanged from the previous year. Jinchuan has been China’s largest nickel sulfide producer since early 1960, with 772,000 tonnes in 2021. Potential growth will come primarily from ramp-up of the Wanatiara Persada join venture NPI project in Indonesia, which has a capacity of around 30,000 t/y of nickel in NPI grading 10%-15%. Jinchuan also owns the Xiarihamu nickel mine in China, which is scheduled to commission in late 2022, with a designed production capacity of 300,000 t/y of nickel concentrate.

Vale’s nickel businesses are concentrated in Canada and Brazil. The company also operates Sorowako in Indonesia under PT Vale Indonesia Tbk. Vale’s company AISC was $6.10/lb in 2021 — a large rise from $4.85/lb in 2020. The increase can be explained by the transition of the open pit at Voisey’s Bay to underground, stoppage and extended maintenance at the Onca Puma operation since the third quarter of 2021 and labor disruptions at its Ontario Division operation in Sudbury. Vale aimed to expand its nickel output from 168,000 tonnes in 2021 to 175,000-190,000 tonnes in 2022-23 and to 220,000 t/y beyond 2024. The potential growth will primarily come from operations in Indonesia and stabilized production in Canada.

Glencore’s AISC was $6.32/lb for 2021. The company produced 1,023,000 tonnes in 2021, a 7.2% drop compared with 2020 due to a five-week planned statutory maintenance in May and June 2021 at the Murrin Murrin operation in Australia, and operational issues at the Koniambo mine in New Caledonia, including the failure of an onsite power generator and furnace number two suffering a slag leak during its recommissioning phase. The company forecasts modest production growth between 2022 and 2024, with the planned ramp-up of Koniambo and the commissioning of Raglan Phase II and III extension projects. The company has given production guidance of 110,000-120,000 tonnes for 2022, 120,000 tonnes for 2023 and 135,000 tonnes for 2024.

BHP Group’s nickel business consists of the BHP Billiton Nickel West Pty Ltd. operations in Western Australia, including Mt Keith and Leinster. The company’s AISC was $8.58/lb in 2021. Nickel West produced 89,000 tonnes, an 11% increase from 80,000 tonnes in 2020, reflecting strong performances from the Mt Keith Satellite mine and Leinster underground mine complex, which reached full production in September 2019. The nickel sulfate plant at the Kwinana refinery was commissioned in the third quarter of 2021, with a designed capacity of 100,000 t/y of nickel sulfate for the battery market. The company has been actively seeking more nickel resources through exploration, acquisition and early-stage options. BHP acquired the Kabanga nickel project in Tanzania in December 2021. Kabanga is regarded as the world’s largest development-ready nickel sulfide deposit, and is expected to start production in 2025 at a minimum output of 40,000 t/y of nickel, 6,000 t/y of copper and 3,000 t/y of cobalt. 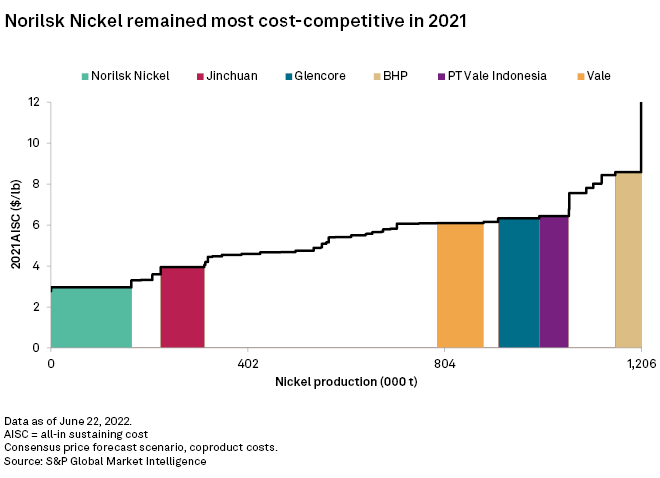 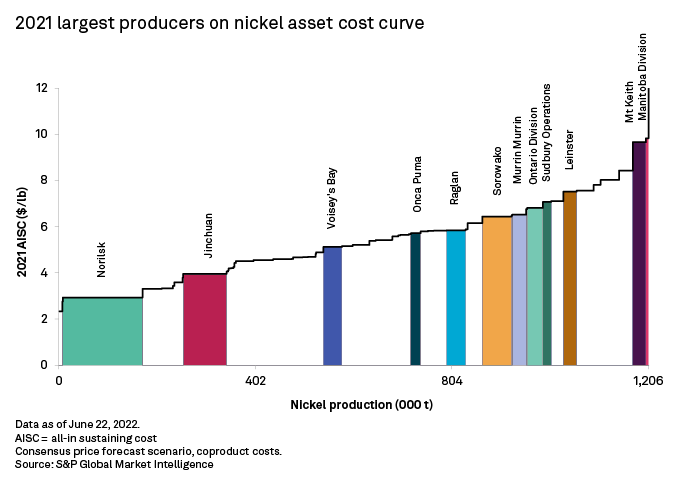 The nickel industry had a remarkable year in 2021, with the nickel price soaring to a seven-year high above $20,000 per tonne at year-end. Nickel producers can be encouraged to continue with their growth plans — fueled by nickel prices, which will maintain some of their gains over the past two years, and forecast demand growth for the global electrification and energy transition. Nickel producers are also actively seeking and delivering on cost efficiencies to achieve higher margins amid currency volatility and inflation.