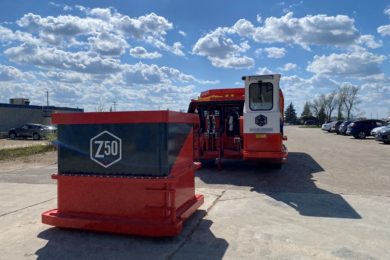 Sandvik Mining and Rock Solutions recently dispatched its first Z50 battery-electric truck from its Winnipeg facility, in Canada, in a move that, it says, underlines the company’s ability to continually optimise its global supply network in the face of growing demand for its solutions.

The mining OEM can assemble a limited number of battery-electric vehicles in Canada, with this capability reducing the emissions associated with transport to the mine site and improving delivery efficiencies.

The company’s battery technology centre of excellence is in Camarillo, in the US, which supports the Winnipeg branch and other facilities in delivering these electric machines. The division headquarters in Turku, Finland, provides additional support where needed.

Sandvik told IM that decisions on the local build options are conducted at an operational level, although battery manufacturing is currently concentrated in California.

It added: “Sandvik is constantly optimising its global supply network. We have manufacturing locations all over the world which are helping us to adjust our manufacturing base when needed. Presently, the Sandvik battery and hybrid electric vehicle (BHEV) business unit is ramping up and there is need for additional capacity. One part of our solution is the decision to utilise our facility and expertise in Winnipeg as support.”

The Z50 battery-electric vehicle has a 50-t payload and leverages Artisan™ battery packs and electric drivelines. It has been deployed at mine sites across North America and Australia, with plans for further deployments in Europe (with LKAB) and Africa (with Gold Fields at South Deep) later this year.

Another major Sandvik battery-electric development in Canada recently occurred with the award of a contract to deliver 10 underground battery-electric loaders along with one electric tethered loader for use at the Jansen Potash project in Saskatchewan. Delivery of the battery-electric loaders and other equipment – including a fleet of cable connected electric MF460 borer miners developed as part of a Sandvik-BHP collaboration over a number of years – is scheduled during 2023 through till 2025.