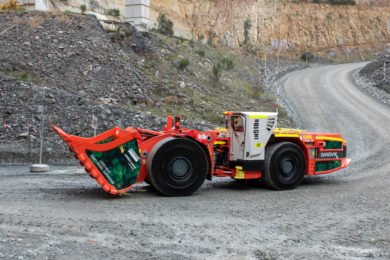 Agnico Eagle is to explore the benefits of battery-electric underground technology after receiving a Sandvik LH518B underground loader at its Fosterville gold mine, in Victoria, Australia, to be tested in the second half of 2022.

The Fosterville operation, 20 km from Bendigo, will become the first mine on Australia’s East Coast and only the second in the country to take delivery of the new Sandvik loader (the first being Gold Fields’ St Ives operation in Western Australia). Featuring advanced lithium-iron phosphate-based battery technology, the LH518B produces zero underground exhaust emissions and emits significantly less heat than its diesel counterparts.

Rob McLean, who was Fosterville’s Chief Mining Engineer at the time, announced plans for the operation to trial the Sandvik LH518B at the IMARC Online event in November 2020. He said the trial – originally slated for 2021 – was part of the company’s vision to “have a fully electric mine”, with the immediate goals being to remove diesel emissions and reduce heat at the operation.

After the new machine arrived on site, Fosterville Gold Mine’s General Manager, Lance Faulkner, said: “As a company, we’re committed to exploring new technologies to further enhance our extensive health and safety programs and to fully integrate sustainability into everything we do. And so, we’re delighted to be putting the LH518B into service at Fosterville. We’re interested to see just what kind of difference it can make in terms of efficiency and the underground working environment, and we look forward to working closely with Sandvik.”

Featuring a 600 kW drivetrain, the Sandvik LH518B allows for higher acceleration than conventional loaders as well as fast ramp speeds, resulting in short cycle times, Sandvik says. Courtesy of its space-efficient battery system and driveline, it is the most compact 18-t loader on the market, capable of fitting in a 4.5 x 4.5 m tunnel, the company claims.

Andrew Dawson, Sandvik Business Line Manager for Load & Haul, says that with the advantages Sandvik battery-electric vehicles (BEVs) bring in terms of safety, efficiency and sustainability, it’s no surprise they are gaining popularity among underground operators.

“By trialling the Sandvik LH518B, Agnico Eagle is putting itself at the forefront of this emerging technology and showing its environmental credentials,” he says. “Not only does the loader produce no underground emissions and significantly reduced heat, but it also delivers new levels of productivity. It all makes for a safer, more comfortable, more controlled underground environment.

Fosterville’s Faulkner says another attractive feature of the Sandvik LH518B is the ability to quickly and simply swap out the battery cage. Sandvik’s AutoSwap technology allows for a depleted battery to be offloaded and a fully charged one loaded in as little as six minutes, with no need for lifting infrastructure.

“It’s crucial that new technologies are sustainable and safe, but also that they contribute to the efficiency and smooth running of our mining operation,” he said. “From what we have heard about the new Sandvik loader, it will deliver on all three fronts.”

“Sandvik is putting its money where its mouth is by investing in battery electric vehicles and other technologies that are helping customers achieve their sustainability goals,” she says. “Customers both globally and in Australia are increasingly looking for these kinds of solutions and we are proud to be providing them.”